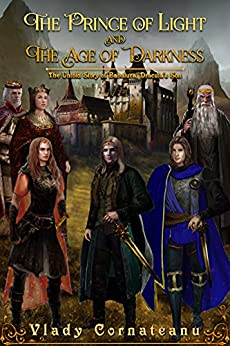 The Prince Of Light And The Age Of Darkness: The Untold Story Of Babaluca, Dracula’s Son

Vlady Cornateanu was born in Romania, (Wallachia of olden days) a country of deep history, legends, and mighty kings. Although he left that land over 50 years ago, ultimately settling in Los Angeles, the history and myths of those forgotten heroes, remained part of hid DNA. That thirst for knowledge continued as he pursued undergrad and graduate studies in archaeology.

Traveling on business back to his native Romania, as well as to Israel, China and many other countries, enabled him to keep alive that passion for history.

The stories heard as a child remained vivid in his mind. It was the love for centuries past and the people behind it that set Vlady, a born storyteller, on the path of adventure, writing his first historical fantasy novel.

AND HERE is a short intro to the story:

To say events happened, transpired, or unfolded a long time ago and in a place so far away you would think it doesn’t exist, does little to lessen the force of their impact. It does not remove the deep taint of blood that stains a personal and collective human tragedy. It does nothing to dispel the deep-seated wrong and unjust unfairness that one man was forced to endure.

But he was not just any man. He was a man destined for greatness, a prince in the course of a legacy that was stripped from him with it just within his reach. There was no justice, and there was no closure. All that remains from events held within the shadows on that tragic day is the foul taste of wrong.

Throughout the march of time, there are crucial moments of humankind that cannot be dismissed, moments where life is inexplicably altered for the better, and most often, the worst. These moments, these doings, are the proverbial pebbles dropped with gentle precision or heaved with reckless havoc into the equally proverbial still waters which then break and ripple, fracture, and splay, and can never lay quiet and peaceful again.

Crimes can serve as such events – fallible affairs of strained human hearts, their souls suffering the crucible of the moments lodged between ethereal stillness and the ecstasy of havoc. Humankind’s history records few of them, inevitably enveloped by the reigns of Man’s imagination that harnesses a beast called legend with the power to grant such crimes, such moments, the everlasting power of myth – a beast to the first, putting ink to parchment to tell a story as if that is all it is, a story created by the imagination of one’s mind. As if to say these events did not happen, not in life, only in one’s thoughts.

Those that are evil are ‘monsters’ and the ones that save us all are ‘heroes’, but a monster, a beast, a legend, is not merely born. There lies a special name for the ones that have the power to create these monsters and take pleasure in such crimes and horrific moments in time by bringing forth the everlasting power of myth into the world, but when there is one, there must be another.

There cannot be a battle, a victory, without a worthy foe, a second beast that holds the secret to transcend time, from its recesses to its fringes and back again, reverberating in the lore of human consciousness and enduring forever, but not all stories end in victory for the right side. History is not made that way, for there are many moments in time when a good man is condemned for a crime he did not commit.

When simple-minded people sit on the throne of justice and rain down misunderstandings and misplaced labels onto an innocent man, the victim becomes the villain and is forced to live out the rest of his days as such. In this world, the villain can be cast as the victim and continue to feed off innocent lives, never caring about the ones he destroys in his path.

Lastly, to condemn a man for the happenstance of the crimes of history, to capriciously and simplistically christen victim as a villain in such afore-referenced events, and villains as victims – or to unquestioningly accept the veracity of such skewed, self-serving tales that have engendered such misplaced labels, taking them for truth – is to err, to misunderstand, to judge without the penetrating light of fact.

To the small extent this trumped-up legacy of crime and this sham of condemned posterity matters contemporarily, what does this injustice hold for the world as events lost in history and decayed through time continue to ripple imperceptibly … well, I leave it to your good graces to decide.

Also, I further preface that these events occurred five centuries before I hereby write and record it now. Long ago, you may think, but I was long of years in the time of their transpiring, an old man of eight hundred years, and I have since lived and lasted six subsequent centuries to the present day.

Know also – for one key part needs to be stated at the dawn of correcting the wrongs of the enduring legend you have unwittingly and mistakenly taken for truth – that I am Valtrus. This was my name through days and events long ago of which I shall speak. This is, now and still, my name in this time and day. I am not the man the prince alluded to. I knew him as you could not, but you may know him when legend and myth are revealed and dispelled.

Where is the place, you ask? It is a real land, tangible, troubled, and intact, then as now. It is a place of myth, known today as Wallachia. You have likely never heard its name before, yet know it by another. It is nestled remotely in a faraway, heavily wooded, sparsely populated, now decrepit but still untamed Western region of Central Europe, in the country contemporary almanacs dub Romania.

And the man, this dark prince, he whom I served during the years of his first life, then through the period of his death, and then again throughout his second life and incarnation? Whether ordained and ornamented with the title of his royal birth and bearing or no, I knew him, as did his people, as Prince Vlad the Good.

Deceived by the beasts of myth and legend, you know him only by the name given to him in cinema. A name tragically, horribly unworthy of he, the best of all men down through all eons of time, brazenly stained and smeared and ridiculed in the past century of theatrical farce. You know him by this name – Dracula.

The Prince Of Light And The Age Of Darkness: The Untold Story Of Babaluca, Dracula’s Son, is now available on Amazon for purchase. Click here for more details: https://www.amazon.com/Vlady-Cornateanu/e/B09J1SX8RV

Elana Webb Wants to be Your Jeweler!