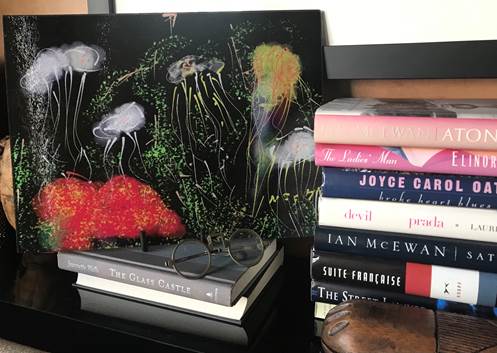 Art, Culture and Travel News from the Past to the Future

Every other month, Quick Culture Insider shares their creative passion by bringing you compelling, unique content. We read about ART all day so that you can save valuable time and get a the best of a “quick” dose of art, travel and culture! Quick Culture Insider aims to be your artful meditation — a sort of brief escapism that soothes stress! You’ll find extraordinary articles on; Architecture, Film, Photography, Travel, Culture, Artists in the News and Spotlight Artist. Below are excerpts of our Architecture, Culture and a Spotlight Artist articles from our July issue, and don’t forget to visit our Needs and Wants page to see our Spotlight Artists’ Curated Collection of Functional Art, Interior Décor and Art-to-Wear. The September Issue just came out this past weekend with all new articles and additions to the curated collection by this month’s featured Spotlight Artist. Get it HERE!

Architecture: A Vatican in Africa? It’s the world largest church and a colossal 1980 replica. 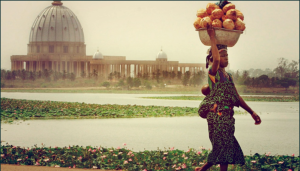 Like a mirage in the dusty haze that settles over the African Bush, stands an almost exact replica of the St. Peter’s Basilica in the Vatican City. Upon its completion in 1989, not only did the lookalike structure ‘borrow’ the design of the Roman Renaissance Dome and Encircled Plaza, but measuring at 30,000 square meters. It even took St. Peter’s title as the largest church on earth, surpassing the Guinness world record. Oh, and the whole thing is totally empty.

Basilique Notre-Dame De La Paix De Yamoussoukro, also known as the “Basilica of the Bush”, is the estimated $300 million indulgence of president Felix Houphouet-Boigny. The Ivory Coast’s first president and third longest-serving leader in the world at the time of his death (after Fidel Castro and Kim Il-Sung of Korea) Perhaps you see where this is going! Democrat or Dictator (I’ll leave that argument for a rainy day) 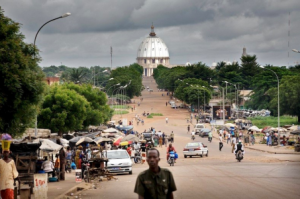 Houphouet-Boigny was ruling a country already in dire financial straits when he decided it would be a good idea to build a luxurious Vatican clone in the outskirts of his hometown of Yamoussoukro surrounded by poverty. To read more about the Vatican in Africa click here.

Culture: Changing times influenced the Kimono in Japan. Did you know kimono simply means “thing worn” and was originally a catch-all term for clothing? 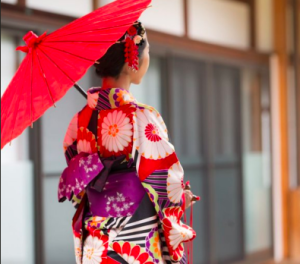 The Kimono serves as a cultural shorthand for a symbol of tradition in Japan, but it has a very complex past even though it is simply crafted from one piece of fabric with a single seam. The kimono first appeared in the 8th century. Heian noblewomen wore 12 layers, symbolizing both the seasons and events during the peaceful Heian era of 794 – 1192 AD. It was during that period when the straightline-cut sewing technique was developed, changing fashion in Japan forever. This new method allowed for versatile garments that were essentially one-size-fits-all and suitable for all climates. The simple kimono slowly became layered. This allowed people to get more creative with color, which prior to that, denoted the time of year or political social class. This led to a veritable explosion of hues during the Kamakura (1192-1338) and Muromachi (1338-1573) periods. Bright colors were all the rage — including on the battlefield. As for the name, what we now call a kimono was known as a kosode, which means small sleeves, during the Edo period (1603-1868).

A person’s kimono can say a lot about them: age, gender and marital status. We live in an age of nostalgia, which is part of why the kimono is as recognizable as a symbol of Japan today as it would have been hundreds of years ago. While you might not find, many people wearing them on the streets of Tokyo, they remain a vital thread in Japan’s cultural fabric.

White is like a double-edged sword in Japanese culture. It is a blessed and sacred color that you see in traditional weddings and the Japanese national flag, but on the other hand, it inherently denotes death and mourning too. 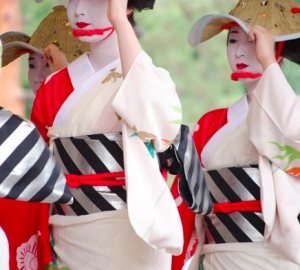 Green the color of life and growth. In addition, the Japanese word for green is also the word for vegetation. It represents eternity and vitality. You can see how much they love nature by appreciating the green gardens or small plants in almost every Japanese house.

Red you see red a lot in Japan, especially on the shrine gates and temples. It is believed that red can protect people from evil and disaster. However, do not bring anything red to your Japanese friends as a housewarming gift. It’s associated with fire, which might bring bad luck or fire accidents to the new house. Click here to read more about Kimono Culture. 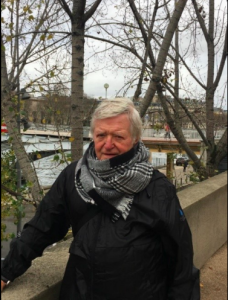 William Ternay, AKA Bill, has been a good friend of Ellen’s for years. In a recent interview for ShoutoutLA Ellen mentions a wonderful, versatile artist who enlightened her about being creative — she didn’t have to be a great illustrator or painter to be considered an artist. Bill is that person

Bill’s 2500+ judicial drawings have appeared on all of the major TV networks. This has inspired him to write a book chronicling his experiences as a courtroom artist. Coming soon! 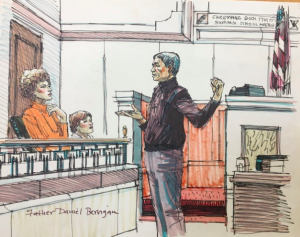 The image to the left is a courtroom illustration of Reverend Daniel J. Berrigan, a Jesuit priest and poet whose defiant protests helped shape the tactics of opposition to the Vietnam War. He, with his brother, Philip, along with seven other Catholic activists entered a Knights of Columbus building in Catonsville and went up to the second floor where the local draft board had offices. In front of astonished clerks, they seized hundreds of draft records, carried them down to the parking lot and set them on fire with homemade napalm. This catalyzing episode occurred on May 17, 1968, six weeks after the murder of the Reverend Dr. Martin Luther King, Jr. and the resulting outbreak of riots in dozens of cities. After a trial that served as a platform for their antiwar message, the Berrigans were convicted of destroying government property and sentenced to three years each in the federal prison in Danbury, Conn. Having exhausted their appeals, they were to begin serving their terms on April 10, 1970. Instead, they raised the stakes by going underground. The men who had been on the cover of Time were now on the FBI’s most-wanted list. As Daniel explained in a letter to the French magazine Africasia, he was not buying the “mythology” fostered by American liberals that there was a “moral necessity of joining illegal action to legal consequences.” In any case, both brothers were tracked down and sent to prison.

Portraits: This portrait is of Ellen’s daughter at 9 (she’s now 37) and was painted by Bill after a “family and friends” visit to Philadelphia. What Ellen found remarkable is that Bill, knowing she lived in LA, re-imagined a background to reflect the West Coast. 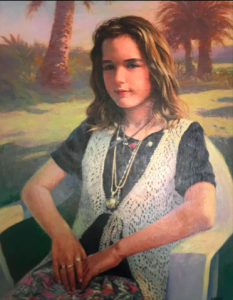 (He took many photos of Blair during the 2 hours that were spent in the backyard of a friend’s home in suburban Philadelphia.) Imagine trying to get a 9-year old to sit still for endless hours, right? He captured the essence of her. It’s Ellen’s own personal Mona Lisa—enigmatic smile, three quarter view, sfumato background and her eyes follow you everywhere! 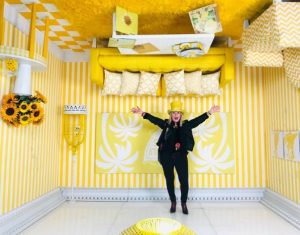 Ellen grew up in the ‘burbs of Philly’. Her career began with fashion and interior design. When she moved to LA, it evolved into production and costume design for TV, film and theater. She’s been an instructor at the Fashion Institute of Design & Merchandising (FIDM) and guest lecturer at UCLA. When the pandemic is over, she will resume providing art appreciation tours in Los Angeles and looks forward to resuming distinctive excursions to Europe, Asia, India and beyond through her sister site, Quick Culture. Local tours are at The Getty, LACMA, the Norton Simon Museum and a walking tour of the public art and architecture in Beverly Hills. Notables she has toured range from Judge Merrick Garland (U.S. Attorney General) to Max Getty (J. Paul Getty’s great-grandson.) Established in 2005, Quick Culture was conceived to provide entertaining and informative small, custom, private art tours and unforgettable global journeys. She has curated odysseys that span the world from Avignon to Zhongshan Lu for both casual travelers and seasoned explorers.

As Quick Culture Insider’s Editor and Publisher, she and her fellow art detectives promise to have you amazed by the unfamiliar and make you carefully ponder and laugh out loud. Sometimes simultaneously. She is inspired by emerging artists and is eager to share new discoveries and quirks by established masters. Her mission is for the content to never be boring or elitist. Admittedly, that’s a big promise! And (except for the exclusive-to-Quick Culture Insider’s curated collection of items) it’s FREE!

“Great Art is a fragrant, complex stew of creativity and skill. Without creativity,  you can only copy; without skill, it’s locked in your mind!”—Ellen Greenberg